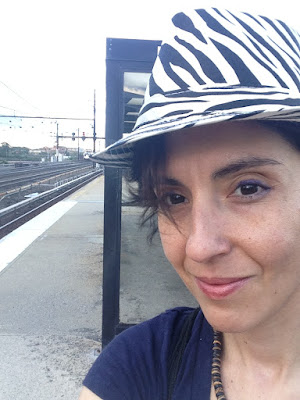 paulA neves, a Luso-American writer, multimedia artist, Newark native, and recipient of the 2020 NJ Poets Prize from the Journal of NJ Poets, is the author of the chapbook, capricornucopia: the dream of the goats (Finishing Line Press 2018), and the co-author (with Nick Kline) of the poetry/photography collection, Shirts & Skins (Shine Portrait Studio Press 2017). Other writing has appeared in Red Fez, Newest Americans, City Brink, The Acentos Review, The Abuela Stories Project, Queen Mob’s Teahouse, Writers of the Portuguese Diaspora, and elsewhere. paulA has been a teaching artist for the GlassBook Project, with pieces in various of its collections, and has also exhibited work at ArtFront Gallery, Gallery at 14 Maple, Index Art Center and the West Orange Arts Council. paulA is the co-founder of Parkway North Productions and co-produced (with Boris Tsessarsky) the short film Every Alien Pen, a selection at the 2019 NYC Independent Film Festival. A graduate of Rutgers Newark’s MFA in Creative Writing program, paulA has received fellowships from NYFA, CantoMundo, the Sundress Academy for the Arts, and the Disquiet International Literary Program, and is a co-founder of the Kale Soup for the Soul Luso-American reading series and Brick City Collective of Newark writers, artists and activists. paulA's work often focuses on themes of work, family, identity,(dis)placement, eco-justice, spirituality, and immigrant forebears whose sacrifices have made much possible.

Email ThisBlogThis!Share to TwitterShare to FacebookShare to Pinterest
Home