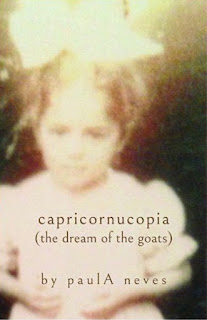 neves’ imagination thrives at the rich intersection of Luso-American identity and womanhood, a place where the life-long questions about love, beauty, and loss take shape, and where the compelling journey of the poet’s emotional and intellectual labors originate. Fiercely curious, capricornucopia offers a feast for the discerning taste, each page an exploration “always polishing the surfaces,/ hoping to find what’s underneath” the attractions and motivations of culture, language, and the impassioned heart.–Rigoberto González
[Order from Finishing Line Press or Amazon] 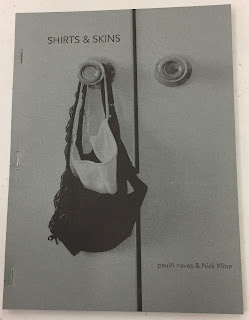 Shirts & Skins consists of a series of photographs by Nick Kline depicting horizontal lines composed from a selection of striped shirts worn and owned by paulA neves’ late mother, Maria, and snapshots of these same shirts framed from moments as they were worn in life, accompanied by paulA neves’ poems and essays. It is a meditation on immigration, insularity, acculturation—what it means to be American, mother, father, child, adult, and gendered within inherited legacies of cultural trauma and comfort, with Newark, NJ and its greater metro area’s Portuguese community always a presence. Shirts & Skins considers what it means to be whole and alive in one’s skin.
[Inquiries]

- REVIEWS -
"Only More So," Cleaver Magazine
"couplets for a shrinking world," Gávea-Brown Journal
"The Captain Asks for a Show of Hands" Whatchu Reading?, Poetry Foundation

Email ThisBlogThis!Share to TwitterShare to FacebookShare to Pinterest
Home